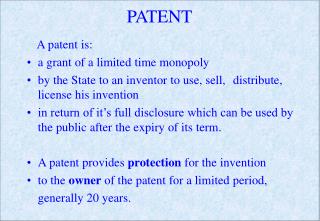 PATENT. A patent is: a grant of a limited time monopoly by the State to an inventor to use, sell, distribute, license his invention in return of it’s full disclosure which can be used by the public after the expiry of its term. A patent provides protection for the invention

Case Law - Decisions by the EPO Board of Appeal in the Field of Computer Implemented Inventions - . conference on

Patent Law Firm - The first thing that you need to do, is to make sure that you are researching and finding the patent

Patent law firms - When you are in need of professional legal advice, you need to make sure that you know where to go.

Patent Consultant in India - If you are looking for timely and genuine advice on patent and copyrights issues,

Should You Hire a Patent Attorney? - Filing a patent for intellectual property is necessary for businesses that innovate