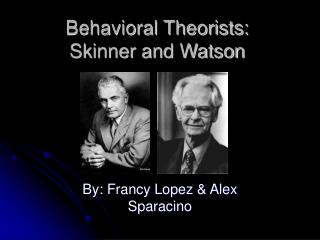 Behavioral Theorists: Skinner and Watson. By: Francy Lopez & Alex Sparacino. The Behavioral Learning Theory. A theory that focuses on objectively observable behaviors and discounts any independent activities of the mind. Dear Ladies and Gentlemen - . &quot;… the earth was unformed and void …and god saw everything that he had made

... Write a behavioral objective for each level of Bloom’s Taxonomy of the Cognitive Domain according to the

To be effective in crisis conditions, the leaders must be transformational . transforming crises into challenges p.45.

Discovering the Structure of DNA - . what is dna?. dna = deoxyribonucleic acid holds all our cell’s information located

1: Dr. Mortimer came over later to take back his cane and explain the initials meant Caring Cross - The hound of the

1.30.2013 - . put the following words into the chart below based on your knowledge of them. aloof fawning skinner

1.6 Behavioral Equivalence - . two very important concepts in the study and analysis of programs equivalence between