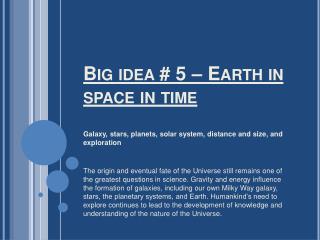 BIG IDEA: - Micro and macro economic, investment and prudential decisions are made on the basis of financial reporting by

Big Idea: - . air is something real and takes up space.

Big Idea - . the ocean is important yet relatively unexplored. the science of marine biology.

Big Idea - . electricity and magnetism are part of a single force that has many useful applications such as conversion to

BIG IDEA: - The american war in indochina changed australian society by promoting a modern liberal democracy that was