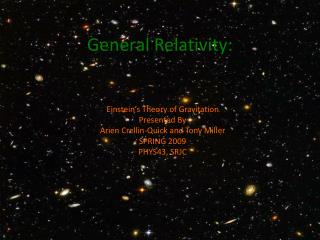 General Relativity is Not a Field Theory - . cauchy-kowalevskaya – field theory has finite # dof per space point

As an object approaches the speed of light, its momentum increases dramatically. - According to special relativity, mass

Relativity - Review!. relativity. relativity. a reference frame can be thought of as a set of coordinate axes inertial

Relativity - . h4: some consequences of special relativity. twin paradox. an interesting and amusing result predicted by