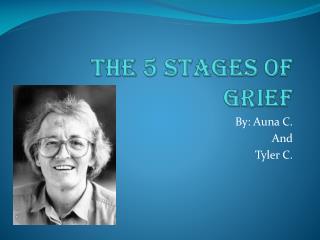 The 5 stages of Grief The 5 stages of Grief . By: Auna C. And Tyler C. Elizabeth Kubler-Ross. She was born July 8, 1926 and died August 24, 2004 A swiss born psychiatrist Author of the groundbreaking book “On Death and Dying” (1969), where she first discussed what is now know as the Kubler-Ross model.

The 5 stages of Grief

The Five stages of the Grieving Process - . based on dr. elisabeth kubler-ross’ model. step 1 – denial and

The Five Stages of Grief Kübler -Ross Model - . by: joshua packer. elisabeth kübler -ross. who was

The Stages of Death - . before and after death. before death: ante-mortem moment of death: agonal period after death:

Coping With Loss/Grieving - . bummer day. i wanted to bring some comic relief into today’s lesson before we begin!

Normal Grief Reactions - . grief. “an emotion or set of emotions due to a loss” grief is a normal reaction to loss.

Grieving/Death - . “it's only when we truly know and understand that we have a limited time on earth -- and that we

Bereavement and Grief - . definitions bereavement: the process of adjusting to the experience of loss, especially to the

Kubler-Ross - . stages of grief. stages. may not occur in order may overlap or be repeated may not progress through all