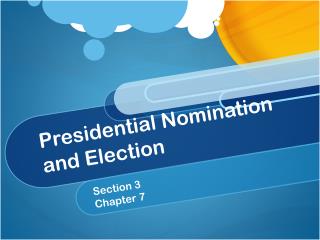 The Election Process - . module 6.4: presidential election. electing the president. president and vice-president are not

The Electoral College - . does it work properly or should we fix it?. the founders on presidential election. some wanted

How to become President of the United States - . the road to the white house. what are five things you would look for in

Presidential Election - . 2012. who are the two men running for president of the united states?. mitt romney barack

The Nominating Process and Presidential Primaries - . “voting and elections in the united states”. * how does an

Electoral College - . the process to elect the president of the united states. introduction. electoral college 101

The Presidential Election Process - . introduction: the electoral college. one of the least understood parts of our

Presidential Primaries: - . how iowa, new hampshire, and weird rules determine who wins. presidential primaries:. or, who

Campaigns and Elections - . first time ever…. election of 1800: the transition from adams to jefferson marked the first