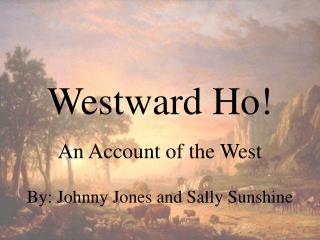 Westward Ho!. An Account of the West By: Johnny Jones and Sally Sunshine. The Mormons. Causes. Mormon: a Christian sect founded by Joseph Smith in 1830 AKA The Church of Jesus Christ of Latter-day Saints

Manifest Destiny: The Goal That Changed Westward Expansion - . john petrolias. 1820. 1850. what is manifest

Sweet Betsy from Pike - John a. stone, before 1858 as you listen, point out features in the painting that the song

The Oregon Trail - . the oregon trail was the only practical route to the western united states between 1843 and the

Westward Expansion: Inventions That Affected the Lives of Americans

Westward Expansion and Slavery - . as the united states expanded westward, the conflict over slavery grew more bitter and