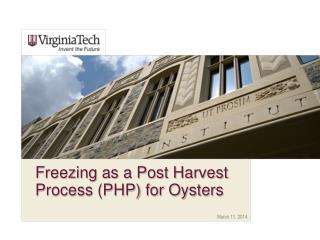 Freezing as a Post Harvest Process (PHP) for Oysters Freezing as a Post Harvest Process (PHP) for Oysters

How Cells Harvest Energy - . chapter 7. respiration. organisms can be classified based on how they obtain energy:

Post-Audit Notification (PAN) - . asap to pan – what’s it all about?. ucla corporate financial services with ucla

Tilapia Aquaculture – An Overview: Harvest, Processing, Marketing in US and Mexico - . kevin fitzsimmons university of

OYSTERS - . by: randolyn roberts per.4. did you know?. the best time to eat an oyster is when it is cold , around the