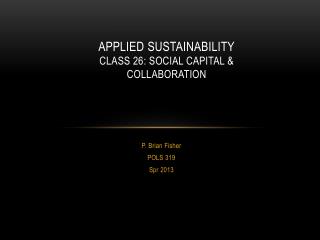 “The future for tourism after the crisis: does social tourism offer a route to sustainability?” - . scott mccabe,

Sustainable Development A Geographic Perspective - . today i am going to talk about the basics of sustainability: from an

Green School Capital Campaign - . june 2009. this is a slideshow enter or pgdn takes you forward, pgup takes you back.

Experimental Evidence on Trading Favors in Networks - . markus mobius and tanya rosenblat november 2004. what do we mean