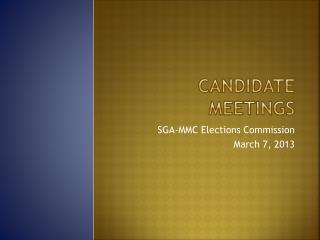 MEETINGS - . the word ‘meetings’ implies the coming together of a certain number of members for transacting the

Meetings - . print communications . what is a meeting?. in a meeting, two or more people come together to discuss one or

Meetings - . vocabulary. absent – adj. not present the vice president is absent due to unforeseen circumstances.

MEETINGS ?? - . bloody meetings!!. chairman or discussion leader. sets the boundaries of the discussion the diabetes

Meetings - . how many meetings do you attend each month &amp; what are they?. continuation slide. what are the

Meetings - . member responsibilities in meetings. prepare study the agenda study the minutes prepare for your

MEETINGS - . an introduction. end show. meetings. meetings are a gathering of people for a purpose. meetings can be

Meetings - . verbal announcements or reminders should always be backed up by documented ones. the date, location,