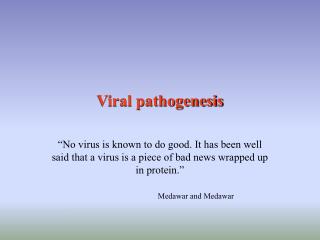 Viral pathogenesis. “No virus is known to do good. It has been well said that a virus is a piece of bad news wrapped up in protein.”. Medawar and Medawar. Learning objectives. Describe mechanisms that viruses use to damage host cells.

VIRAL ENCEPHALITIS - . irv salit november 2009. objectives to know……. the causes of viral encephalitis in canada the

Chlamydia - . chlamydia trachomatis. learning objectives. upon completion of this content, the learner will be able to:

Pathogenesis of Viral Infections Ability of viruses to cause disease. Viewed on two levels: - (1) changes that occur

Viral Pathogenesis - . pathogenesis: the process by which one organism causes disease in another two components of viral