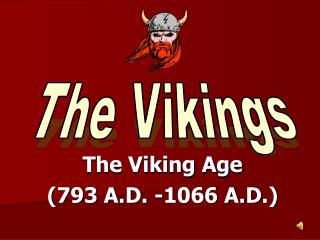 The Vikings. The Viking Age (793 A.D. -1066 A.D.). Who Are The Vikings?. Other Names: Norsemen (Northmen), Danes, Varangians, Rus Seafaring Warriors from Scandinavia (Norway, Sweden, Denmark) Farmers at home but feared when away from home. Where Did the Vikings Come From?.

The Smithsonian Adventure - . the smithsonian presents. . . http://www.mnh.si.edu/vikings/. welcome to the vikings!!!.

Norse Mythology - . what is norse mythology?. before the norse, and other germanic peoples, were converted to

DOL Week 6 Vikings - . tell me about scandinavia it cunsists of sweden norway and denmark. “the vikings was living

Viking Age 750 to 1400 CE - . the viking age was a time of transition and upheaval in scandinavia. raids were conducted

The Barbarian Invasions - . by: cassie wooters and kaitlyn johnson. what were the barbarian invasions?. period of human

Charlemagne and Vikings - . sit with your europe partner and say something meaningful and nice to each other set a

Brief History of England - . alyssa sawl. early start . the first people lived in england around 45000 bc 6500 bc sea

Vikings Raiding &amp; Trading Quiz - . by mitchell clavant. what were the vikings main raiding/trading transport?. a)