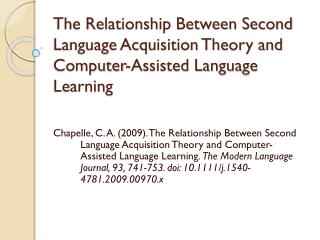 Lec . (4, 5) - . methods for syntheses of nonmaterial. how to get nanomaterials ?. there are two general approaches to

Second Language Acquisition/Learning - . lecture # 30. review of last lecture. it is no wonder that parents take such joy

Introduction to second language acquisition and Specific Language Impairments in Children - . 37-975-01 challenges to

The effects of age in SLA - . adapted from franceschina (2004). 1. some observable facts. older is better in the short

Stages of SLA - . students and their teachers . the second language learner and the language acquisition process. stages

Language Learning Styles and Strategies - . why do we need to know our students learning styles?. case