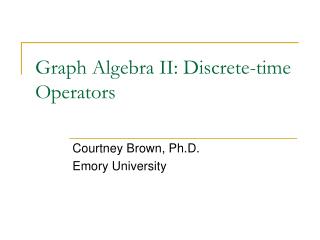 ALGEBRA TILES - . algebra tiles. rachel magnuson. by the end of this show, you’ll be able to. . . . define and explain

CS4413 Graph Algorithms II (These materials are used in the classroom only) - . graph searching. given: a graph g = (v,

Discrete-time Random Signals - . until now, we have assumed that the signals are deterministic, i.e., each value of a