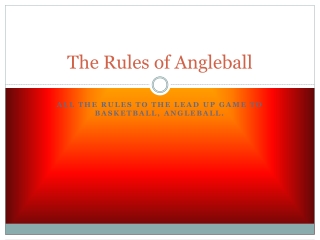 Two-Year Playing-Rules Cycle - What are playing rules? playing rules are what happens on the field, court, pool, pitch,

Uncertainty and Rules - . we have already seen that expert systems can operate within the realm of uncertainty. there are

The Rules - Unit . 1. the rules. rules of the accounting &quot; game” the process of accounting and bookkeeping are

Rules, RIF and RuleML - . rule knowledge. rules generalize facts by making them conditional on other facts (often via

ABOUT RULES IN SCHOOL - . sponsored by the guidance and counseling program. benton elementary presented by mrs. miriam

Enforcing Classroom Rules - . prevention. have a limited number of rules so the students can remember the rules easily

Under 9 Age Group- 08/09 - . rules, playing conditions and scoring. sejca rules. the rules of cricket published by the