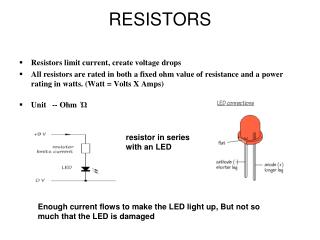 RESISTORS. Resistors limit current, create voltage drops All resistors are rated in both a fixed ohm value of resistance and a power rating in watts. (Watt = Volts X Amps) Unit -- Ohm Ώ. resistor in series with an LED. Chapter 26 - . direct-current circuits. goals for chapter 26. to analyze circuits having resistors in series and parallel

J.SHANMUGAPRIYAN M.E Department of Electrical and Electronics Engineering, - Chettinad college of engineering and

RESISTORS IN SERIES - In a series circuit, the current is the same - In conclusion, there are two requirements which must

Chapter 4 Components for Electronic Systems - . description of geometrical, thermal and some electrical properties of