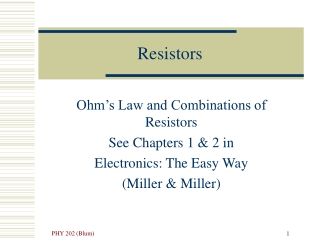 Resistors. Ohm’s Law and Combinations of Resistors See Chapters 1 & 2 in Electronics: The Easy Way (Miller & Miller). Electric Charge. Electric charge is a fundamental property of some of the particles that make up matter, especially (but not only) electrons and protons. RESISTORS - . resistors limit current, create voltage drops all resistors are rated in both a fixed ohm value of

Resistors - This will give you brief idea about

RESISTORS - . resistors limit current, create voltage drops all resistors are rated in both a fixed ohm value of

Resistors - . in this presentation you will:. discover how to use multimeters to measure resistance. identify how

Resistors - . resistors can be either fixed or variable in value fixed resistors come in a variety of different shapes,

Resistors - . how can we intentionally change the amount of resistance in our circuit?. which of the three parts of

Resistors - . resistors - job. oppose the flow of current can be used as a fuse in circuitry measured in ohms. resistors

20.2 Resistors in Series or Resistors in Parallel - . pp 736- 745. essential questions. based on the orientation of