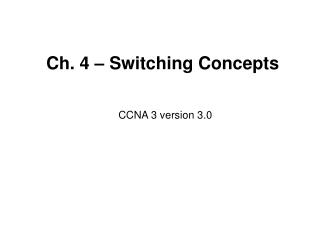 Ch. 4 – Switching Concepts. CCNA 3 version 3.0. Overview. Ethernet networks used to be built using repeaters . When the performance of these networks began to suffer because too many devices shared the same segment, network engineers added bridges to create multiple collision domains. LAN Switching Concepts - . overview. ethernet networks used to be built using repeaters . when the performance of these

Ch 8. Switching - . switch. devices that interconnected with each other connecting all nodes (like mesh network) is not

Clarifying Ideas and Concepts (Ch. 4) - . language and thought. color tiles: what is orange? what is teal? chairman or