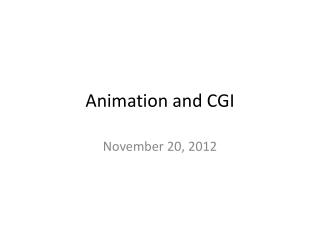 CGI and AJAX - . cs-260 dick steflik. cgi. common gateway interface a set of standards that define how information is

CGI - . csc 309 by: meng lou. introduction. a html document that a web server delivers is static, which means it doesn't

CGI - . compare the meercat. http://film.comparethemeerkat.com / i think that this advert use 3d because i don’t thin

CGI - . overview. a plain html document is static a cgi program is executed in real-time, so that it can output dynamic

CGI - . cgi programming. what is &quot;cgi&quot;? common gateway interface a means of running an executable

CGI and Perl - Basics - . please use speaker notes for additional information!. note that the param(‘dept’) could

Perl, CGI and DBI - . ashley george ageorge@cs.dal.ca march 7th, 2005. overview. each of the following will be presented