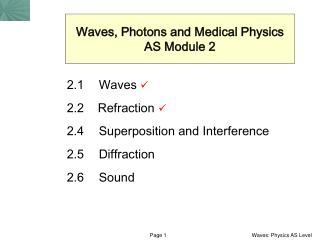 AS Physics – Module 1 - . definitions. for each term, think of a definition. after 15 seconds, the definition will

AS Module 2 - . the demographic transition model. a simple explanation of how it works. what is the basic

Physics 123C Waves - . lecture 9 ray optics. models of light. is light a particle or a wave? physics in the 20 th century

Physics of waves - . study these and the other properties of waves for the test3/11. definition. a form of energy