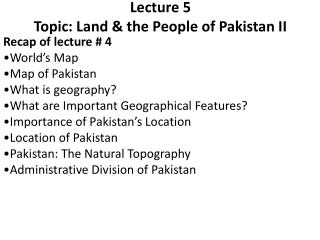 EMERGENCY - An urgent response to the flooding in pakistan. huge regions of pakistan have been flooded covering an area

Lecture # 39 SME Development in Pakistan - . can government of pakistan lay a pivotal role in this

Thursday, 2/26/04 Topic: When are people hungry? - . which factors contribute to chronic poverty/hunger and which to

Pakistan - . the problems and solutions regarding terrorism and 4thgw. by: zain nabi khan. pakistan, a beautiful land of

The Role of Arboviruses as a Cause of Undifferentiated Febrile Illness in Sind, Pakistan - . topic no. 6.c topic title:

Topic 1 Lecture 7 - . px. deriving demand curves. the total effect of the price change is to move the consumer’s choice

Bubble Map of Ways to Help the Flood Disaster in Pakistan - . go out to pakistan to help. send food to the people. send

Topic Lecture: Disadvantages - . rachel. photo courtesy of bbc. mechanism. each topic has a mechanism… this year our

LAND RIGHTS - . symbolism of the flag. the people. life giving sun and bond between the people and the land. the land.