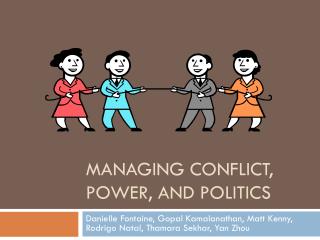 Managing conflict, power, and politics. Danielle Fontaine, Gopal Kamalanathan , Matt Kenny, Rodrigo Natal, Thamara Sekhar , Yan Zhou. Organizational Conflict. Organizational conflict is the clash that occurs when the goal-directed behavior of one group blocks or thwarts the goals of another. Introduction to Leadership - . overview what is leadership and why does it matter? what leaders and managers do are