Whose Voice Is It? - PowerPoint PPT Presentation 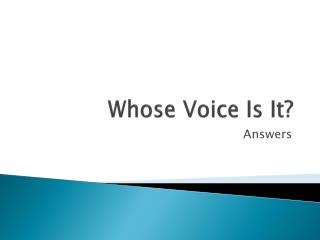 Whose Voice Is It?

Whose Voice Is It?

Point of View - . is a literary term which relates to who the narrator in a work is, from what voice or angle of vision

Whose course is it anyway?- giving first year students a voice in curriculum design - Amanda corrigan school of

Persuasion, propaganda, and faulty reasoning - . whose voice guides your choice when making decisions?. how do you decide

Persuasion, propaganda, and faulty reasoning - . whose voice guides your choice when making decisions?. how do you decide

A Voice For Animals - . animals don’t have a voice, so they cant speak out about wrongful treatment in shelters. a

Voice &amp; diction - . how to develop a clear, strong and interesting voice. having an expressive voice and using

Using Your Voice - . notes for sept. 3rd. to produce sound, the lungs, mouth and throat work together to do three

Rhetoric and Propaganda techniques in the media - Clipart-microsoft office xp 2002. whose voice guides your choice?.

SEN Knowing and Growing - . becoming a teenager. when you become a teenager, some changes will happen to your body. look