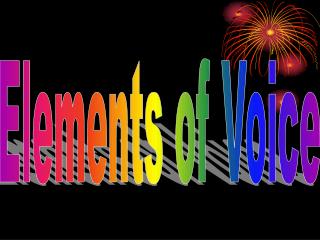 Elements of Voice. Elements of Voice. Writing with a clear voice doesn’t just happen; it requires conscious choices You must practice the basic elements of voice. DICTION. Diction refers to the choice of words and is the foundation of voice and all good writing. Diction Exercise.

Laryngitis - . swelling and irritation/ inflammation of the voice box/ larynx and is usually associated with hoarseness

The Lee Silverman Voice Treatment (LSVT) Approach - . presented by: kim miesen november 24, 2004. what is the lee

Statutory Interpretation - . topic 7. reading statutes:. focus on the section break it into its elements determine the