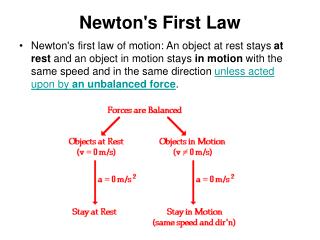 Newton's First Law. Newton's first law of motion: An object at rest stays at rest and an object in motion stays in motion with the same speed and in the same direction unless acted upon by an unbalanced force. The Meaning of Force. Newton and Kepler - . newton’s law of gravitation . the law of gravity isaac newton deduced that two particles of

Newton’s Laws - . b rought to you by: sir isaac newton and laura akesson (mostly newton). nasa for educators. nasa.gov

Newton’s Law of Motion - . newton’s first law; every object continues in its state of rest, or of uniform velocity

Newton’s Laws Of Motion - . what is a force?. newton’s 1 st law. newton’s first law was actually discovered by

Chapter 3 Newton’s First Law of Motion - . aristotle on motion. natural motion not caused by a force objects seek their