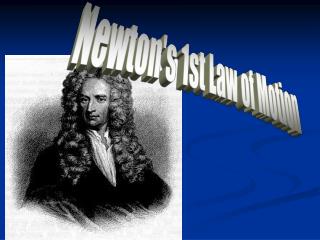 Newton's 1st Law of Motion. Forces. A force is a push or a pull any influence that can change the velocity of an object There can be no acceleration without a force is a vector having both magnitude and direction. Like any other vectors, force vectors are represented by arrows. NEWTON'S LAW-LAW of MOTION - . kinematics: based on the definition of shift, velocity and acceleration question: whether

Newton's Second Law of Motion - Do now 2.10.14 grab a calculator if a table is being pushed across the floor at 20n and

Newton's Third Law of Motion - . third law - to every action force, there is an equal and opposite reaction. *when you

Newton’s 1st Law of Motion - . objects will not begin to move or change motion until an unbalanced force acts on it.

Newton's Laws Of Motion - . by: juana b utanda and christopher sanchez. first activity a body at rest. materials you will

Newton's Law of Motion - Dept. Of Applied Science - This presentation explains newton's law of motion and is presented by

Newton's Laws of Motion - . newton’s first law of motion. an object at rest tends to stay at rest and an object in

Newton's Laws of Motion - . essential question. how can i explain the causes of motion on an object? learning objectives