Our Sun and the Stars - PowerPoint PPT Presentation 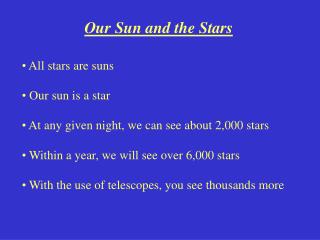 Our Sun and the Stars Our Sun and the Stars. All stars are suns Our sun is a star At any given night, we can see about 2,000 stars Within a year, we will see over 6,000 stars With the use of telescopes, you see thousands more. The total amount of stars in our galaxy are in the billions

Our Sun and the Stars

The Family of Stars - 0. the family of stars. chapter 9. what we can measure directly: surface temperature and color

Chapter 13: Stars - . few thousand stars visible to naked eye each of them is unique all of them share much in common.

Review: The life of Stars - . activity. evolution of stars please work in groups of 3-5 hand in one worksheet per group

Lives of Stars - . stars begin as gas and dust called a nebula. gravity pulls the gas and dust in and fusion begins. this

Why Stars Twinkle - By kayla price. why stars twinkle. how do stars twinkle?. big question. when i see stars in the night

Characteristics of stars - . how are stars classified? what is an h-r diagram and how do astronomers use it?. what does a

Stars &amp; our Sun - . why do stars shine?. a star is a huge ball of hot glowing gases, called plasma. stars twinkle

Stars and Galaxies - . types of stars. color: cooler stars are red. as they get hotter they turn orange, yellow and then

STARS - . amole spectra of science 2013. what are stars?. a large celestial body of hot gas that emits light greeks

Neutron Stars - . by: matthew buza. star power. importance of stars and their role in the universe. overview of all

Stars &amp; Their Characteristics - . constellations. a group of stars that appear to form a pattern in the sky. only

Stars and the Sun - . chapter 18.2. objectives. describe the basic structure and properties of stars explain how the

Orbits of Disk Stars - . what governs stellar orbits of disk stars: for the most part, we can treat all the “other”