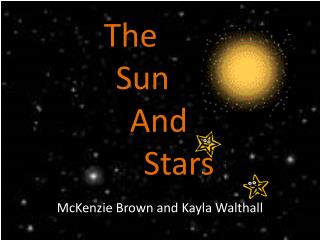 The Sun And Stars

The Sun And Stars. McKenzie Brown and Kayla Walthall.

The Sun And Stars

Our Sun and the Stars - . all stars are suns our sun is a star at any given night, we can see about 2,000 stars within a

The Sun Closest Star to Earth - . characteristics of the sun. size the sun measures 1.4 million kilometers across. 110

The Sun, Stars and Solar System - . objects beyond the earth’s atmosphere. what is the sun?. sun safety. when studying

Our Star, the Sun - . chapter eighteen. guiding questions. what is the source of the sun’s energy? what is the internal

The Sun &amp; Stars - . by: shanika bates. how big is the sun. the sun is by far the largest object in the solar

The Sun and The Stars - . all stars are suns our sun is a star at any given night, we can see about 2,000 stars within a

Sun and Stars - . by: jill davis and elizabeth gay. the stars in our

Mrs. Woods’ First Grade SCIENCE The Sun, Moon, and Stars - . is the sun a star?. the sun is the closest star to earth.

The Sun, the closest star - . background for next week’s lab. what are the absolute magnitudes of some stars. apparent

The Sun, the Moon, and Stars - . vocabulary. what is the sun?. click here for answer. it is the star closest to the

Introduction to Stars - . our sun is a star and its closeness to earth has allowed astronomers to study and analyze its

Sun and other Stars - . by: kennedy howard presley wilson tyra gilbert. what is the