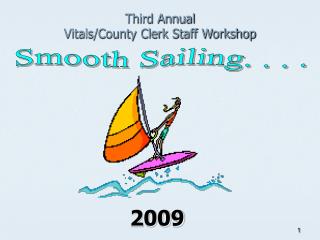 Smooth Sailing. Third Annual Vitals/County Clerk Staff Workshop. 2009. DISCLAIMER / WARNING This is a training workshop, but local practices do vary from county to county according to local policy and practice as well as local County Counsel opinions.

Annual Requisitioner Certification - . why must i be certified ?. the purpose of this certification is to train and