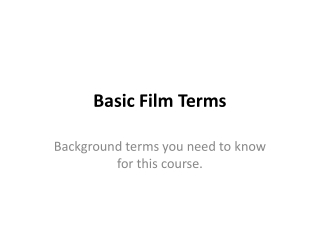 Basic Film Terms. Background terms you need to know for this course. take. an attempt to get a shot on film; the single, uninterrupted operation of a camera as it continuously exposes a series of frames. shot. Basic Film Terms - . auteur. french for &quot;author&quot;. used by critics to indicate the figure, usually the

Basic Film Terms - . frame. dividing line between the edges of the screen image and the enclosing darkness of the theater

Film Terms - . using abbreviations for taking notes. close-up (cu). focuses on a character’s face or an object in the

Film Terms - . (oscar, best powerpoint title, 2008). writing it down. film treatment: a description of the film in

Basic Terms - . auteur. french for &quot;author&quot;. used to indicate the figure, usually the director, who

Film Study Terms - . english language arts. frame. dividing line between the edges of the screen image and the enclosing

Basic Terms - . universe – the universe means everything. galaxy – a galaxy is a large “island” of stars held

Basic Terms - . population: a group of individuals from the same species that all live in the same area at the same time.

Basic Film Production - . production phases. there are three phases of production common to most professionally

Basic Physics Terms - . in this lesson, we will review some basic physics terms and demonstrate them using our lego