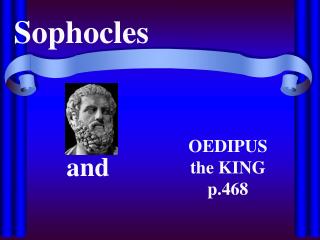 Sophocles . OEDIPUS the KING p.468. and. SOPHOCLES (496-406 BC). Concentrated on timeless problems of men and women striving against fate for happiness Sophocles - . rachel, terrell, and the other girl whom i don’t know the name of…. . 5 facts about sophocles. he

Sophocles - . the greek theater. basis. greek theater was rooted in religion festivals were to honor the god dionysus so

Sophocles - . oedipus cycle. sophocles 496-405 bce. the most successful dramatist to present plays at the theater of

Sophocles - . and. sophocles (496-406 bc). concentrated on timeless problems of men and women striving against fate for

Sophocles - . oedipus the king. fifth century greece. sophocles was born circa 496 bce in colonus and lived for 90 years

Sophocles’ Antigone - . introduction/background. here’s what we’re going to talk about. i. social/political

Sophocles and Tragedy - . sophocles added a great deal to the theatre experience: he was the first playwright to

Antigone by: Sophocles - . sophocles. born around 496/5 bc to a noble family in colonus (now athens) excelled in

Sophocles Vs. Euripides - . by laura and emmy. our documentary. this documentary will compare the lives of sophocles and