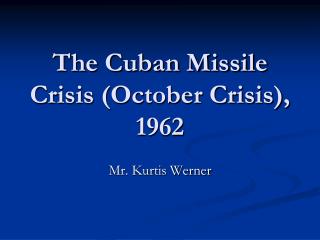 The Cuban Missile Crisis (October Crisis), 1962. Mr. Kurtis Werner. Lesson objectives/questions. What was the background to the events in Cuba? How successful were early attempts at ‘containment’? Why was the USSR interested in helping Cuba? What happened during the October Crisis? PREVENTION MANAGEMENT OF AGGRESSIVE BEHAVIOR - Identifying crisis behavior. learn to stop a crisis before it startswhat

The Cuban Missile Crisis and Beyond - . fidel castro took control of cuba in 1959 and declared himself a communist. the

Finance and the Crisis Umberto Cherubini University of Bologna - . outline. how the crisis started securitization

Cuba: The Bay of Pigs and the Cuban Missile Crisis - . the bay of pigs. in 1959, fidel castro seized power in cuba.