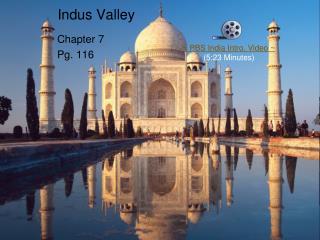 Indus Valley. ~ PBS India Intro. Video ~ (5:23 Minutes). Chapter 7 Pg. 116. Objectives. How did government develop? How did they rise/fall? Discuss major conflicts and the significance of them. What role does religion play? Discuss the impact of the innovations of the period. Vocabulary. Indus Valley - . the harappan culture existed along the indus river in what is present day pakistan. it was named after

Indus Valley - . review. bellwork. write the questions and answers in your notes. 1. who was at the top of the indus

Indus Valley Civilization - . built along the banks of the river system because of the huge mountains north and west of

About indus valley - Discuss the controversy about their script and language , list their main

Indus Valley Art - . indus valley art i. the indus valley is one of the world's earliest urban civilizations, along with

INDUS VALLEY CIVILIZATION - . the origins of hinduism trace the religion's roots to the indus valley civilization circa