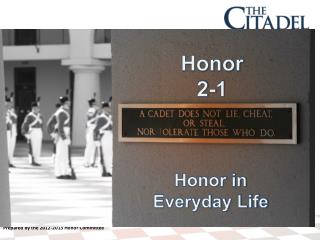 Distinguished Cadet N-1-1 Awarded annually to one cadet who exhibits the highest degree of excellence in scholastics.

Theodulf of Orl ans 760-821 - Glory, and honor, and laud be to thee, king, christ, the redeemer! before whose steps

Give Honor To Whom Honor Is Due - . render therefore to all their due: taxes to whom taxes are due, customs to whom

Honor Your Father - . how earthly fathers can honor and be honored by our heavenly father. honor your father. it is

Honor Code - . “we will not lie, steal or cheat, nor tolerate among us anyone who does.”. overview. purpose four

Journal 1: Honor vs. Betrayal - . write a paragraph, or create a detailed t-chart to show the differences between honor

TAU BETA PI THE ENGINEERING HONOR SOCIETY - . what does it mean to our members?. purpose. honor engineering students

HONOR IN LATIN AMERICAN SOCIETY - . from the work chronicle of a death foretold by gabriel garcia marquez. focal points.

SONGS SCOUTS SING - . boy scouts of the philippines www.tejerobsp.webs.com. table of contents. on my honor. on my honor,