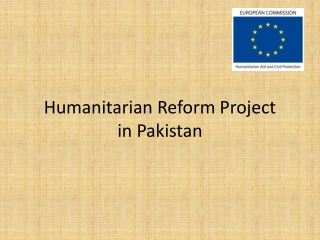 Humanitarian Reform Project in Pakistan - . introduction to nhrp globally. the ngos and humanitarian reform project is a

Famous Humanitarian Project - . step 1: with your partner, decide your top 3 humanitarians you would like to research. .

JUSTICE PROJECT PAKISTAN - . representing. the most vulnerable prisoners facing the harshest punishments. who do we