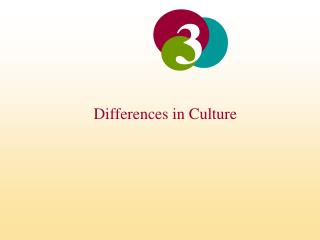 Differences in Culture - . chapter 3 ba 555. what is culture?. “culture is that complex whole which includes knowledge,

Introduction to Cultural Diversity - . refujio rodriguez from cultural diversity: a primer for the human services by

Cultural differences should not separate us from each other, but rather cultural diversity - Brings a collective

Culture - . early years lecture 14. this lecture. what do we mean by ‘culture’? how is culture different from

Observations on differences in culture - . turkısh is more gender neutral language. the rate of having babies without

Gender and Culture Differences in Personality - . gender stereotypes. gender – social interpretation of what it means

CULTURE IN MANAGEMENT: THE MEASUREMENT OF DIFFERENCES - . dony eko prasetyo, s.ip. culture????. a way of life of a group

A2 Economics and Business Social and cultural differences in doing business Unit 3 - . by mrs hilton for revisionstation.