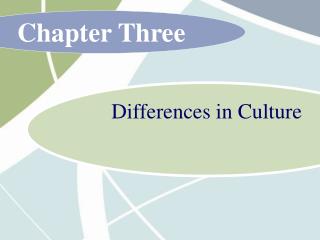 Differences in Culture. Chapter Three. “Culture is that complex whole which includes knowledge, belief, art, morals, law, custom, and other capabilities acquired by man as a member of society.” - Edward Tylor. What is Culture?.

Models of childhood/Differences - . lecture three: 9/11/13. “i’m not that innocent…”. children’s literature and

Communicating in a Diverse World - . doing business in the world. challenges of intercultural communication. what is

1.2 linking culture to behavior - . what do we mean by the word &quot;culture&quot;? what are the visible and

EU Culture Reflection: Think, Pair, share - . compare your passport before the eu and after. what differences are there?

Diversity Appreciation - . presented by iowa civil rights commission. what is diversity?. what is culture?. why does it

Chapter 3 - . differences in culture. societies’ differ along cultural dimensions what is culture? how/why do social