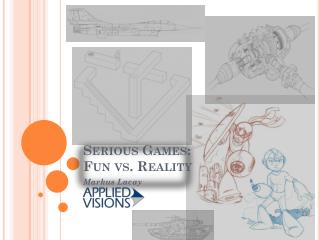 Serious Games: Fun vs. Reality. Markus Lacay. What are games?. A structured  activity, usually undertaken for enjoyment and sometimes used as an educational tool.  ~ Wikipedia A series of meaningful choices ~ Sid Meier How old is your brain? - Overview of games and gamers./n some learning using digital games./n 12 areas of interest to the