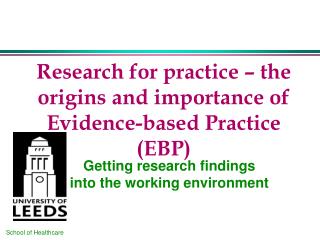 Research for practice – the origins and importance of Evidence-based Practice (EBP). Getting research findings into the working environment. Aim. To understand the importance of evidence based practice in healthcare. Objectives. Beyond evidence based practice - . richard smith editor, bmj. what i want to talk about. reflections on whether evidence

Evidence-Based Practice: An Overview - . “how do you know that what you do and how you do it really works?”. holm,

Steps of Evidence Based Practice By Dr. Hanan Said Ali - . objectives. enumerate the steps of ebp. identify how to: ask

Using evidence in practice - . nick price 4 th april 2006. objectives. to have an overall understanding of the concept of

Developing Evidence Based Research from your Own Practice - . what is it? “…use of treatment methodologies for which

Evidence-based Practice What Does it Mean for Nursing? - . nancy wells vanderbilt medical center october, 2007. what is