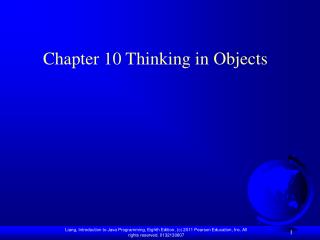 Chapter 9 Objects and Classes - . objectives. to describe objects and classes, and use classes to model objects (§9.2).

Chapter 5: Perceiving Objects and Scenes - . figure 5-3 p97. why is it so difficult to design a perceiving machine?. the

Chapter 6—Objects and Classes - Java. the art and science of. an introduction. to computer science. eric s. roberts. c

Thinking Objects With A Procedural Brain - . jeff peters jeff@grokfusebox.com. why are you here?. you have a procedural

Chapter 10: Thinking and Language - . speak up!. think before you speak. solve the problem. talk to the animals.

Chapter 10 Thinking in Objects - . objectives. to create immutable objects from immutable classes to protect the contents

Chapter 4 - . forces in one dimension. force - is a push or pull exerted on an object can cause objects to speed up can

Chapter 10: Thinking and Language - . thinking:. how do we form concepts, solve problems and make judgments? . cognition:

Chapter 8 THINKING AND LANGUAGE - 2. chapter 8. thinking is??. 1. thinking is the mental activity that is involved in the

Chapter 2 – Using Objects - . chapter goals. to learn about variables to understand the concepts of classes and objects

Chapter 4 - . forces and mass. does not apply for very tiny objects (&lt; atomic sizes) objects moving near the speed

Thinking and Language Chapter 9 - . cognition. cognition. thinking , or cognition, refers to a process that involves