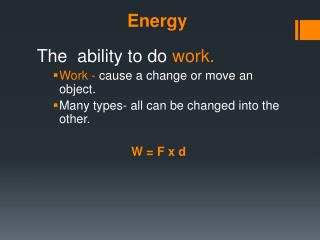 Energy. The ability to do work. Work - cause a change or move an object. Many types- all can be changed into the other . W = F x d. Types of energy. Potential - stored energy Position, condition or composition Kinetic Energy- energy something has because its moving