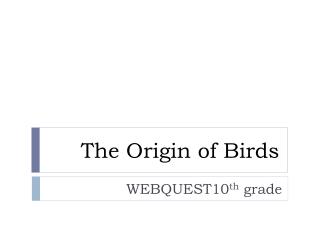 The Origin of Birds

The Origin of Birds

Birds - . “reptiles by another name”. general characteristics of birds. adaptations for flight a ppendages modified

BIRDS - . evolution of birds:. fossil evidence shows that birds evolved from the same line as crocodiles and dinosaurs.

Evolution of Birds from Reptiles - . sz2- students will explain the evolutionary history of animals over the geological

Phylogeny of Birds – Class Aves - . birds first appear, unambiguously, in the fossil record in the jurassic ( ~ 150

Evolution of Birds - . evolution of birds . kingdom animalia , phylum chordata , class aves where did they come from?

Macroevolution - . macroevolution. the origin of taxonomic groups higher than the species level concerned with major