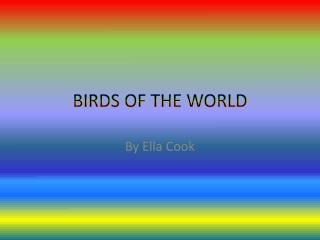 BIRDS OF THE WORLD BIRDS OF THE WORLD

BIRDS - . a study guide. raptors!. part 1. bald eagle!. golden eagle!. like all eagles, it belongs to the family

Domesticated Birds - . small animal care . parrot family. contains some of the smartest birds many species can be taught