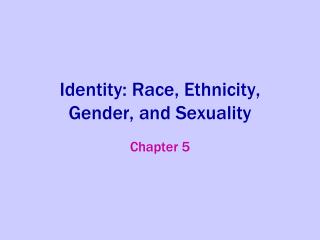 Identity: Race, Ethnicity, Gender, and Sexuality. Chapter 5. Key Question:. What is Identity and How are Identities Constructed?. Identity. Identity – “how we make sense of ourselves” – Rose Race and ethnicity - . race/ethnicity and territory african-americans and africans apartheid and south africa race and

Appreciating Diversity - Operational definitions of diversity. diversity in and of itself embraces all human differences.

Ethnicity - . ethnicity – identity with a group of people who share the cultural traditions of a particular homeland or

Chapter 5 Notes - . get out your notebooks. identity. identity = how we make sense of ourselves race, ethnicity, gender,

Ethnicity - . by: emily skirpan and caleigh hensley. race vs. ethnicity. what is race? race is used to describe an

Ethnicity and Race - . part 2. learning objectives for ethnicity and race unit. 1. distinguish between race and ethnicity