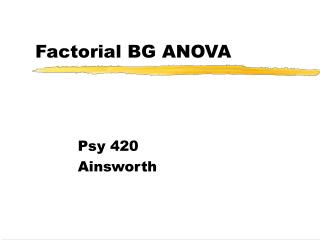 Intro to Factorial Designs - . the importance of â€œconditionalâ€ &amp; non-additive effects the structure,

TWO-WAY BETWEEN-SUBJECTS ANOVA - . what is the purpose?. determine whether there are significant main effects and a

Robust Between Groups Factorial and Robust RM - . brief examples. robustitude. as in most statistical situations there

Calculating Factorial ANOVA - . the basic logic of a factorial anova (e.g. 2x2 anova) is the same as the one-way anova.