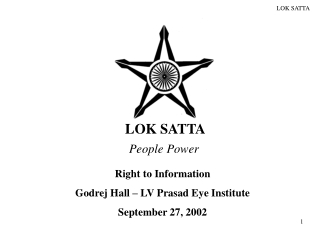 LOK SATTA. People Power. Right to Information Godrej Hall – LV Prasad Eye Institute September 27, 2002. Never doubt that a small group of thoughtful, committed citizens can change the world. Indeed it is the only thing that ever did. Margaret Mead. Mission. LOK SATTA - . people power. deepening democracy – agenda for reform. the purpose of a government is to make it easy for