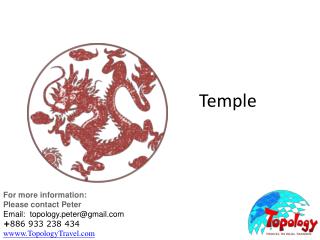 Solomon’s temple - . canaan. after settling in canaan the israelites were led by judges ( shofetin ). the hebrews

Mopidevi Temple - Mopidevi lord subramanyeshwara temple is located in krishna district, andhra pradesh. it is a drive of

TEMPLE UNIVERSITY - . a national leader in entrepreneurship education and applied learning ranked 13 th in the u.s. for

Prefabricated Temple - . “and the house, when it was in building, was built of stone made ready before it was brought