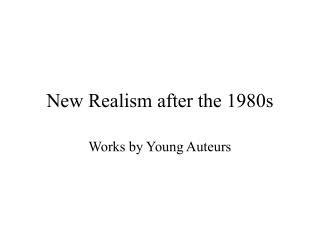 New Realism after the 1980s

New Realism after the 1980s

The Cold War - . origins of the cold war. period after wwii is referred to as the cold war : the tense relationship

Postmodernism and the postmodern frame revisited.

A J Ayer – Logical Positivism - . seminal work: language, truth and logic this was published when he was 26. he was the