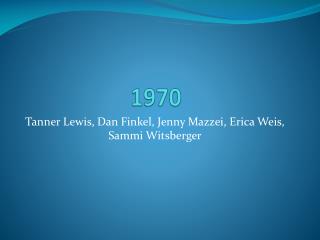 1970. Tanner Lewis, Dan Finkel , Jenny Mazzei, Erica Weis, Sammi Witsberger. Equal Rights Amendment. Equal rights for women has been sought after for many years In the 1920’s Alice Paul made the fight stronger. In the 1960’s the equal rights movement was revived

Retroviruses - . retroviruses. probably the most studied group of viruses in molecular biology!!! enveloped,

Rebecca Horn Working in the media of film - Studied at the hamburg academy for fine arts from 1964 - 1970. tragedy in

Dance music of the 1970s - . it all started in new york night clubs…. …against the domination of rock music. until

What Do Americans Value? (Williams 1970) - . achievement and success hard work efficiency and practicality science and