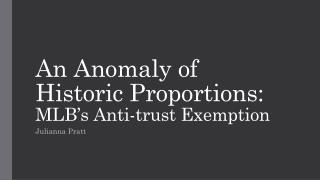 An Anomaly of Historic Proportions: MLB’s Anti-trust Exemption. Julianna Pratt. Background. Sherman Anti-trust Act Passed in 1890, with the intent of protecting consumers from the actions of trusts and monopolies.

Only Trust Him - . hymnal 153. only trust him. come, every soul by sin oppressed, there’s mercy with the lord, and he

Proportions - . jasmine noel 3 rd period class may 3,2013. what are proportions?. proportions are two ratios that are

Pre-Algebra Solving Proportions - . what are you learning?. i can solve proportions. why do you need to know this?.

Hardhat - . exemption. exemption program. you may be exempt from wearing a hard hat, however, you will be required to